A report by Edward J McCarthy:

Ormskirk in West Lancs currently has 3 water towers left but has had others in the past. 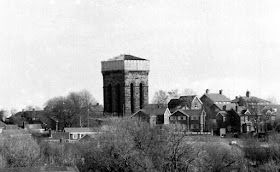 Located on Tower Hill in Ormskirk. Locally, Ormskirk is well known for the concrete, mushroom shaped water tower on Scarth Hill. Less well known is this one just off Greetby Hill. The photograph was taken in 1987 when the tower was not quite as derelict as it is now. 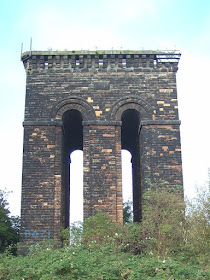 Some information on it-

Water Tower on Tower Hill II* Water tower. 1853-4. For Ormskirk Local Board of Health; now derelict. Coursed squared sandstone, slate roof (dilapidated). Square plan. Romanesque style. Tall tower with 2 narrow full-height Romanesque arches in each side, all with stepped surrounds and arch-bands, linked by an impost band carried round; plain frieze with carved grotesques at the corners, and very emphatic corbelling in machicolated form, surmounted by a large tank enclosed by what appears to be ashlar walling. Pyramidal roof now lacking most slates. HISTORY: unusual survival of early Local Board waterworks structure. Conspicuous landmark on east side of town.

There have been plans to convert it into homes but nothing has been successful yet.

There is still a boundary slab from the building near Nursery Avenue in Ormskirk. There is a photo from 1955 in the Lancashire Lantern: Image Archive.

There was a Braithwaite tank in Ruff Wood on Ruff Lane Ormskirk.

In the woods are the remains of an old quarry. This is all that is left of an important site which provided sandstone to build houses in Ormskirk during the 19th century. 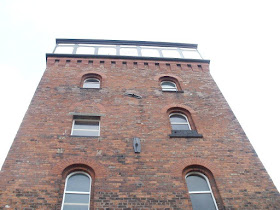 Ormskirk Hospital Water Tower is currently being converted into 2 homes. Located on Pinfold Rd Ormskirk where the old hospital buildings are. This was still in use in the 1980’s -90’s. A smaller tank was attached to it but this part is no longer there. The older hospital site was sold to Persimmon Homes and they sold the water tower privately in 2011. 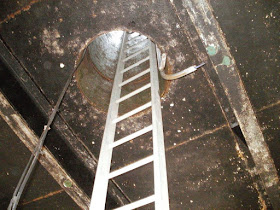 Further photographs taken at this location may be found here. Ormskirk Hospital water tower is featured on Amy Caine's Blog where there is further information and additional photographs. 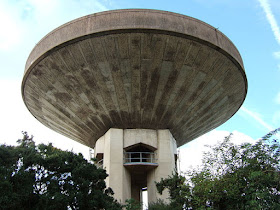 The original tower known locally as the “pepperpot” was built in 1879. It was demolished in 1974. The new water tower was in use from that time. Pictures of the old and new tower and also inside the Pumping Station that has now been converted into homes, may be found on the wiganworld website!

The reasons why the Ormskirk Water Towers were demolished and the new 1974 tower was built, is detailed in a planning application report submitted to Ormskirk U.D.C. by the West Lancashire Water Board, in March 1973.